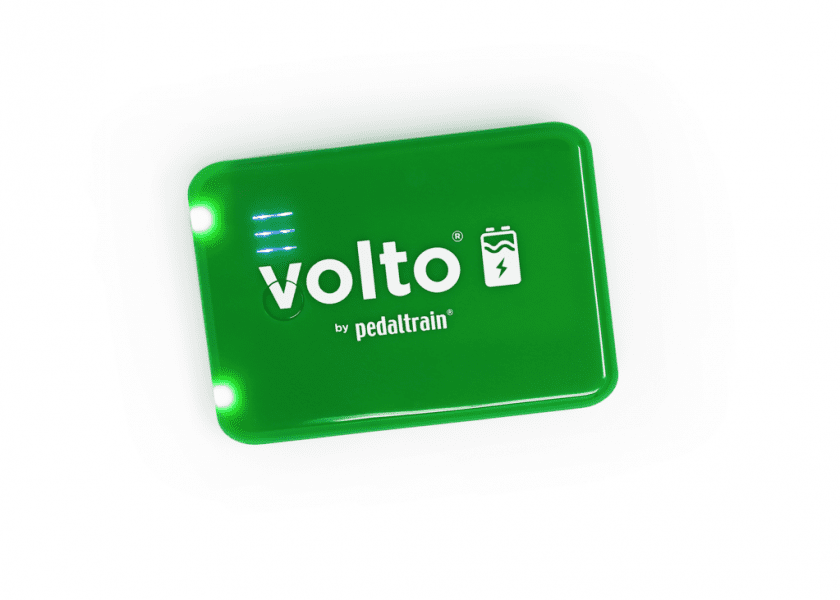 Volto 3 is better than ever with a more powerful battery, more sophisticated circuitry, more lifetime recharges, and huge gains in charge life – up to 25% longer!

A modern alternative to expensive, unreliable, and environmentally hazardous 9V batteries, Volto 3 is engineered for hundreds of lifetime recharges, replacing thousands of 9V batteries – that’s good for your wallet and the environment. With new Battery Health programming to protect against overcharging, Volto 3 boasts double the lifetime recharges of previous versions.

Volto 3 is compatible with all Pedaltrain models. Its slim design, about the same size as a smartphone, makes it a great choice for small pedal boards like the Pedaltrain Nano and Metro series.

The redesigned green shell has a triple reinforced USB housing to make it the most durable Volto yet. Included with Volto 3 are two 3-position daisy chains, two single-end straight cables, an AC charger with international plug adapters, and two strips of hook-and-loop for mounting to your Pedaltrain pedal board.

Volto 3 is capable of providing 6200 mAh of power to light up as many analog 9-volt pedals as you like. Battery life will vary based on the total current draw of the pedals you are powering – the more pedals you use, the faster the battery will discharge.